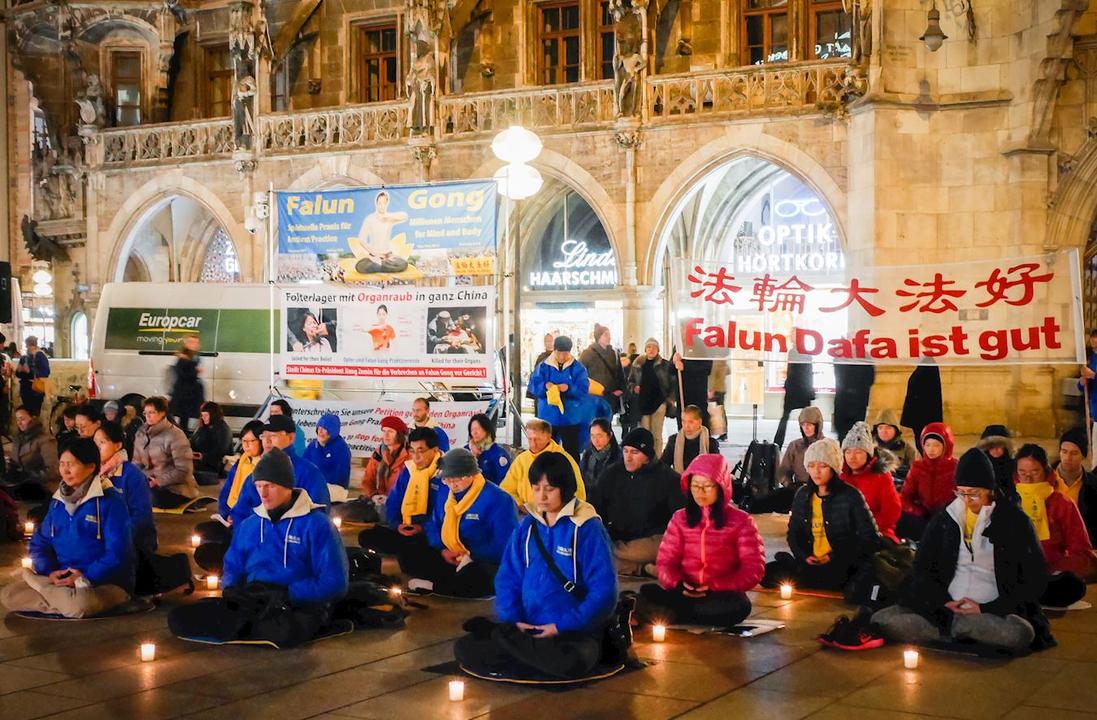 Practitioners from across Europe gathered in Munich from November 4 to 7 for the 2016 European Falun Dafa Experience Sharing Conference and held a series of events in the city to raise public awareness of the persecution in China.

Two candlelight vigils occurred on the evenings of November 4 and 5, to commemorate Falun Dafa practitioners who have lost their lives during the brutal 17-year suppression of this traditional Chinese spiritual discipline. According to information received by the Minghui website, over 4,000 practitioners are confirmed to have died as a direct result of persecution, including torture and other abuse in detention. The actual number is believed to be much higher.

On November 4, practitioners held a candlelight vigil on Marienplatz, Munich’s historic central square. They also held a Falun Gong exercise demonstration and provided information about the persecution in China.

Elena and her husband from France, in Munich to visit their daughter who is studying there, took in the activities at Marienplatz. Surprised by the brutality that is taking place in China, the couple said that they would read about the situation further. They added that they hoped the suppression would end soon.

Candlelight vigil in Munich, Germany, on November 4 to commemorate practitioners who have lost their lives in the brutal persecution in China. 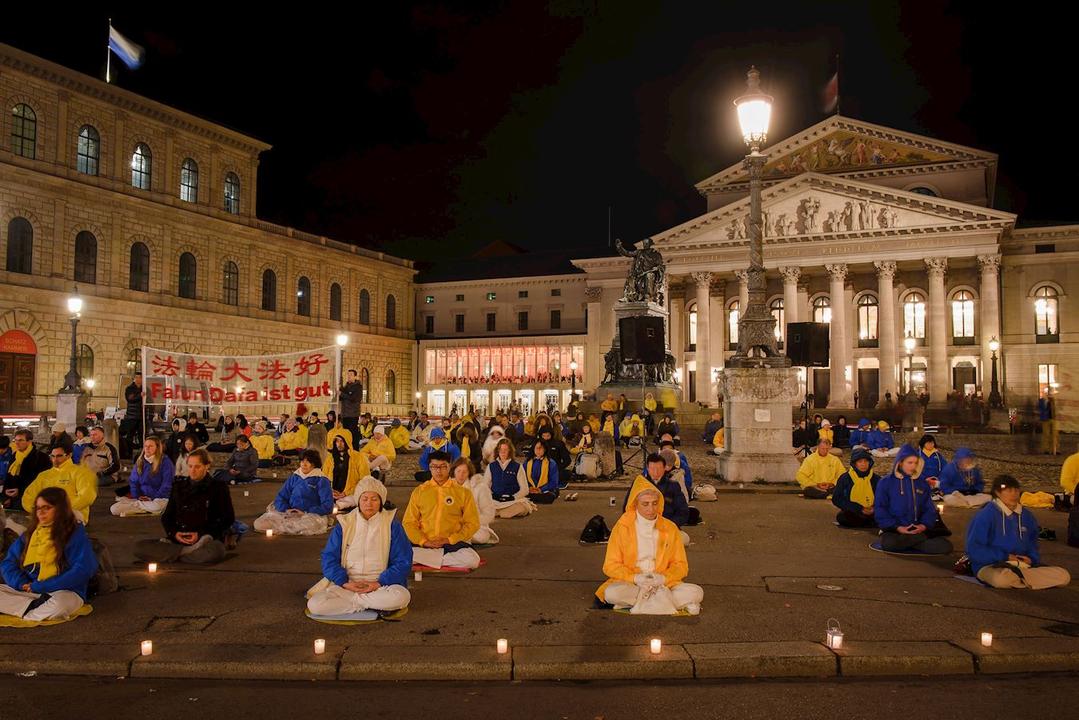 Elena and her husband were surprised to learn of the 17-year-long persecution in China.

Laila, Ander and Carlo, all from Spain and working in Munich, were drawn by the group exercises at Marienplatz. After talking with practitioners, they also learned about the suppression in China. Laila said the persecution is wrong because everyone should have the freedom to practice his or her belief. Ander and Carlo agreed and wished the practitioners well.

The second candlelight vigil was held on Max-Joseph-Platz, another major square in Munich, on November 5.

Anna, a publisher and Munich resident, stopped by to find out more about the persecution in China. She signed a petition urging the German government and the international community to take more action to end the brutalities.

Candlelight vigil at Max-Joseph-Platz on November 5, 2016.

Anna, a publisher in Munich, said that the brutality against Falun Dafa practitioners in China is “disgraceful.”

Anna, who has previously practiced another qigong system, said she could really appreciate Falun Gong’s principles of Truthfulness-Compassion-Forbearance. She added, “[Hearing about] the brutality in China made me very upset and I wanted to cry.” She said she hopes it will end soon.

“I Wish You Could Be Here Every Day”

Christine, a German teacher who lives in the suburbs of Munich, also signed the petition. “I hope more people will learn about this and pay attention to it, so that the suppression will come to an end,” she said.

Christine hopes that more people will become aware of the major human rights violations in China.

Impressed by the peaceful Falun Gong exercises, Christine said she could feel the inner peace of this traditional Chinese spiritual discipline. “Apparently, meditation like this is not only good for practitioners, but will also benefit the world. I like it very much and I wish you could be here every day,” she said.

The Power of Truthfulness-Compassion-Forbearance

Marina, a marketing manager from Russia, said that practitioners should have the freedom to practice their belief everywhere in the world since it benefits everyone. She signed a petition to support practitioners and said she hopes that the Chinese regime’s forced organ harvesting from living Falun Dafa practitioners will end soon.

David, a software engineer from England, read the information about the forced organ harvesting in China and said, “I just do not understand why the Chinese government would target a group of peaceful practitioners.” He said he would write to his parliament members and added that he “would probably go to the Chinese Consulate to protest.”

Antonella, who lives in Germany, had heard about the suppression of Falun Gong in China on social media. She admires practitioners’ spirit and determination to uphold their faith amid the persecution.

Antonella said that she admires practitioners’ perseverance despite the atrocities taking place in China.

After signing the petition calling to end the forced organ harvesting in China, Antonella said that she hopes that her efforts will help. She said, “People should work together and completely solve this problem, because it is related to our future.”