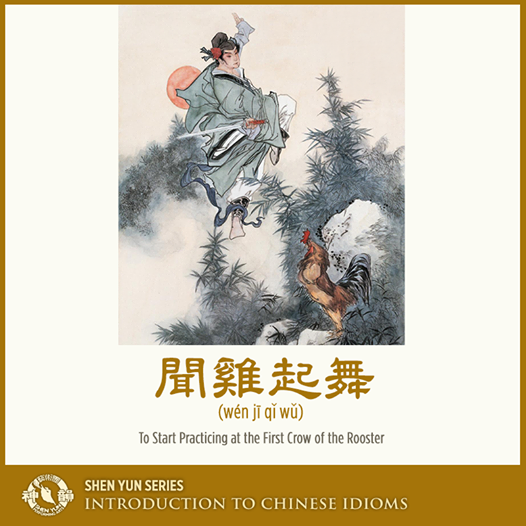 Roosters are known to crow at the first sign of dawn. In ancient times, a rooster crowing in the middle of the night typically signified a bad omen. Not everyone, however, believed that to be true.

During the chaos of the Western Jin Dynasty, there lived a young man named Zuti. War had led the Jin nobles to flee from the northern capital to the south. Zuti, observing all this, made up his mind to one day banish the enemy and reclaim his country.

One night, in the wee morning hours, Zuti and his friend were suddenly driven awake by a rooster crowing loudly. They decided to view this as inspiration, thinking, “This is a call urging us to rise early, to practice Kung Fu so we can grow strong and reclaim our homeland” Starting that day, they would wake up when the rooster crowed, diligently practicing their martial arts day after day. As time went by, their skills improved, and both of them grew to became great generals. Zuti became a master of both pen and sword.

If we look more closely at the Chinese idiom 聞雞起舞 (wén jī qǐ wǔ), 聞 (wén) means to listen. 雞 (jī) is this year’s Chinese zodiac sign: Rooster. 起 (qǐ) means to get up, and 舞 (wǔ) means to dance. The character for martial arts 武 (wǔ) originated from the character for dance 舞 (wǔ), so in the context of this ancient idiom it also means practicing Kung Fu.

The new Year of the Rooster has begun. Are you ready to 聞雞起舞 (wén jī qǐ wǔ)?