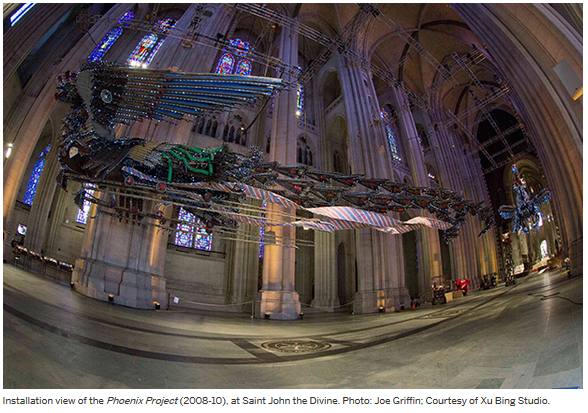 NEW YORK – “Phoenix has landed at the Cathedral” I think there must be a typo on the website of The Cathedral Church of Saint John the Divine, as two Chinese phoenixes have instead risen under its celestial ceiling The exhibition Phoenix: Xu Bing at the Cathedral opened March 1 in New York.

A feat resulting from a laborious two-year process, the Phoenix Project features two birds, a male Feng and a female Huang, each weighing 12 tons and measuring 90 and 100 feet long. Fenghuang, according to traditional Chinese lore, are a pair of mythological creatures that reign over all other birds and symbolize majesty, harmony and conjugal blessing. Often translated as “phoenixes” by the Chinese and non-Chinese alike, Chinese Fenghuang, however, does not carry any connotation of rebirth as suggested by its English rendition. 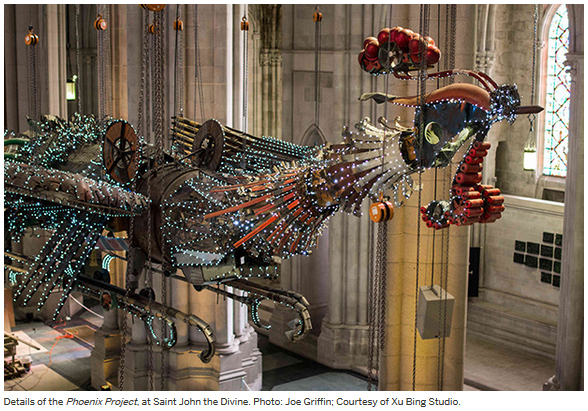 Xu, who lived in New York from 1990 to 2008 and still maintains a studio here, has spoken to the Chinese art world about how the Phoenix Project expresses a “Chinese mindset.” Yet, in addition to the work’s multi-layered references to Chinese iconography and mythology, it draws a subtle connection between recycling and rebirth as a conscious artistic creative process. 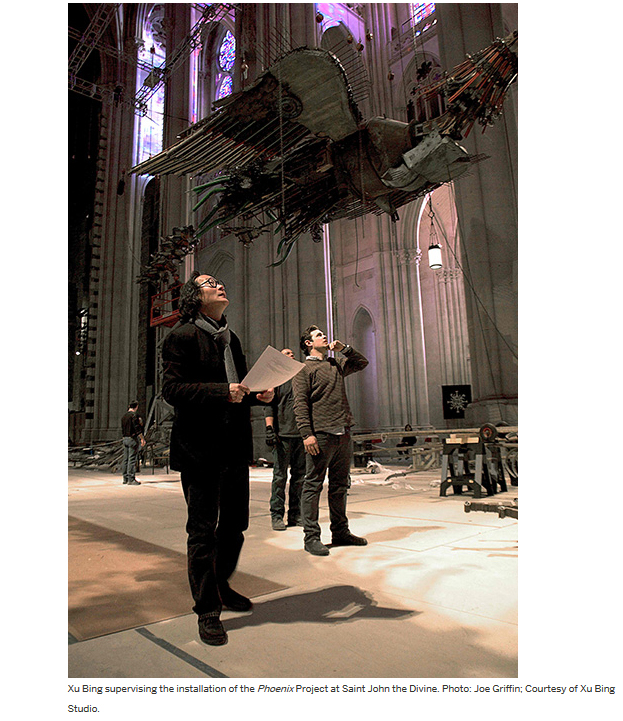 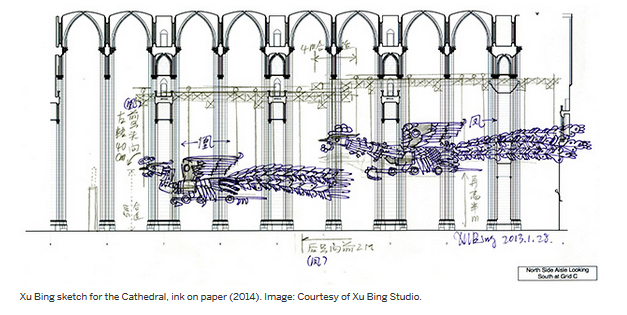 Originally commissioned for a new building in Beijing’s new central business district, the Phoenix Project came to a grounding halt when the government shut down all construction projects on the eve of the 2008 Beijing Olympics. With the onslaught of the concurrent financial crisis, the developers of the new building turned conservative, rejecting Xu’s designs on the grounds of its use of waste. Xu’s determination to complete the project, despite these obstacles, inspired the title “Nine Deaths, Two Births” for an exhibition of the drawings and scale models used in making the Phoenix Project, shown at the Freer Gallery of Art last year. 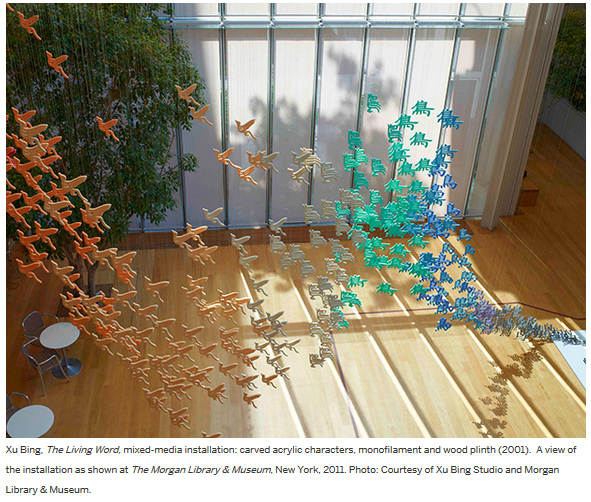 The Phoenix Project is more than a clever take on a mistranslation; it draws on the different symbolic meanings of two cultural traditions by marrying Chinese Fenghuang with the Western phoenix. Xu’s phoenixes become a metaphor for a living word, as human languages are fully capable of taking on new meanings and new contexts, just as an artwork is capable of generating new interpretations when seen in an international environment.

Xu’s obsession with words, and with the Chinese writing system in particular, is rich in pictorial connotations as a means of exploring civilization rivalries and cultural identities, as is evident from his early works such as Book from the Sky and A Case Study of Transference. 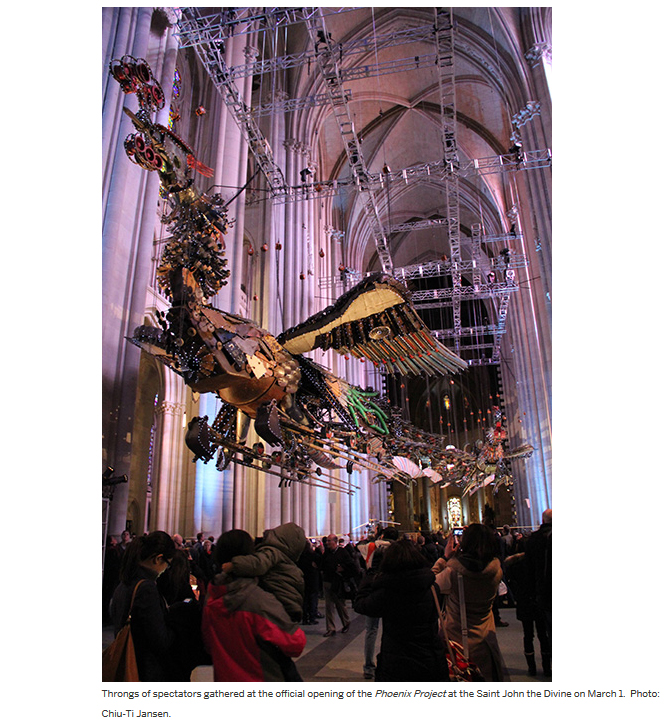 Throngs of spectators gathered at the official opening of the Phoenix Project at the Saint John the Divine on March 1. Photo: Chiu-Ti Jansen.

For some reason, the Phoenix Project reminds me of The Living Word (2001), Xu’s mixed-media installation, an edition of which sold at Sotheby’s in 2008 for 7,607,500 HKD (hammer price with buyer’s premium; approximately USD 980,866). Carved in colored acrylic, 400 calligraphic variants of the Chinese character niao, which stands for bird, take flight from the floor into the air in a dancing trajectory. Starting from the simplified writing that is currently in use in China, these characters trace, in reverse chronological order, the evolutionary history of niao in Chinese writing until niao morphs into the ancient Chinese pictograph derived from a bird’s actual resemblance. Xu’s exploration of the relationship between the conceptual signs and natural objects attests to his abiding interest in the interaction between words, concepts, images and meanings.

In a way, the Phoenix Project re-contextualizes a highly charged cultural symbol. The traditional Chinese character for feng also includes a niao (bird) particle. Even though the Phoenix Project does not deliberately refer to the Chinese writing system, it tells a modern myth about how an artistic concept finds its bearing in concrete materials and imagistic renderings. Previously exhibited in Beijing, Shanghai and Salem (Massachusetts), the Project now discovers its magical moment at a cathedral whose founding doctrine is none other than that of resurrection.

PHOENIX: XU BING AT THE CATHEDRAL

The Cathedral Church of Saint John the Divine