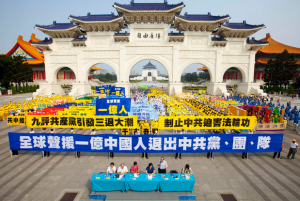 Modern scientist recently discovered the existence of an overwhelming old stone craving on Pingtang, China. The inscription of that stone, once translated, shocked the people in charge of the project. The discoverment, dated around 300 millions years ago, had the phrase “The communist party would fall” written on it.

The Chinese Communist Party (CCP) has been considered a powerful political institution that has used an iron hand for over six decades, and now-a-days it still runs a world power country with over 1,4 billions people. Despite the high accomplishments and the constant hermeticism of the party over their political and economical decisions, China shows mixed signals to the world.

Over a deteriorated natural environment and an abrasive political corruption of the past decade many civilians have decided to cut their ties with the Party. Even formal members of the CCP acknowledge the lack of faith in the communist ideology itself and its sustaining system. The evidence about what we just said? The Tuidang movement.

Tuidang, or “Quit the Party” in chinese, started in 2004 inspired by the publications of “The Nine Commentaries on the Communist Party”, made by the Epoch Times on november of the same year. Its content raised awareness of the wicked intentions of the Party and the elaborated censorship of the Party’s history to the people. After a short period of time after the series were published, the Epoch Times received a significant number of official public letters who expressed their unhappiness towards the party and their desire to retreat from it.

Since 2004 to this year, the grassroot movement has helped around 302 million people to quit the CCP. The Tuidang works with request via electronic form and telephonic assistance. Mostly the people who send their resignation letters are formal or ex-members of the Party and the affiliated organizations like Young Pioneers or the League of Young People. These number of demisions are then published on the central language center of Tauidang.

Most of Tauidang’s volunteers practice Falun Gong, which is a spiritual discipline that its based on the principles of Truth, Compasion and Tolerance. From 1999 until now, Falun Gong practitioners in China have resisted the cruel campaing launched by the CCP meant to erradicate it. This consist of illegal arrest, torture and forced organ harvesting that has been exposed and condemned by international organizations. Still, the CCP continues to put a lot of time and resources to censor this using false propaganda and illegal threats. Regarding to Tauidang, this doesn’t go unnoticed for them. Anyone that supports Tauidang publicly, can expect at least one year of jail. Even though, the telephone assistance team of Tuidang has reached directly the officers who persecutes Falun Gong and shared the truth about the CCP. There have been cases that this officers haved honestly quitted the Party thanks to that call.

Tuidang is considered as non-political since its vision is just about assisting the people interested with their withdrawal to the CCP.