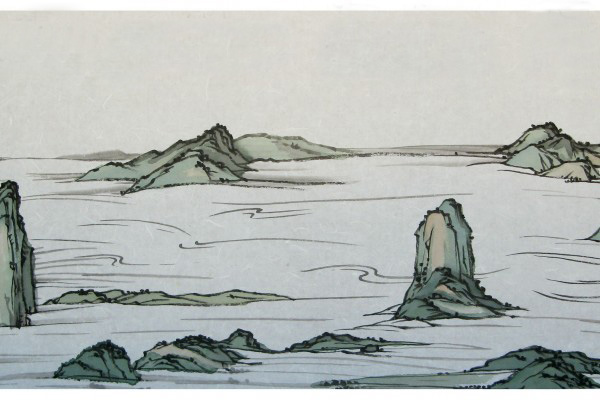 This is the fourth in a series of articles by Epoch Times staff describing the foundations of Chinese civilization, and setting forth the traditional Chinese worldview. The series surveys the course of Chinese history, showing how key figures aided in the creation of China’s divinely-inspired culture. This installment introduces the Great Flood of ancient Chinese legend.

In the latter years of Emperor Yao’s reign, the world was deluged by violent storms and floodwater, as described in the mythological accounts of many cultures around the globe in addition to those of China.

The “Classic of Mountains and Seas,” a series of legendary accounts compiled during the Warring States Period about 2,500 years ago, describes the Great Flood as a tremendous onslaught by waves and rain.

A great western sea overwhelmed the mountains of western China and Inner Mongolia. The waters forced their way into the Yellow River and the Chinese heartland. Fields and dwellings were submerged and destroyed. Masses of people and livestock found their graves in the bellies of fish.

World Legends About the Great Flood

Descriptions of the Great Flood found in the various legends and myths around the world have many similarities. A common theme is that of the disaster being imposed upon humanity as divine punishment for moral degeneracy, and good and honest people comprising the surviving minority.

The damage done to civilizations around the world was huge. Western legends describe the annihilation of existing culture, while records in the Chinese “Book of Documents,” traditionally attributed to Confucius, consider the Flood to be the dividing line between history and prehistory.

The Deluge by Michelangelo. (PD-US)

In Genesis of the Christian Bible, it is recorded: “God saw that the wickedness of man was great in the earth, and that every imagination of the thoughts of his heart was only evil continually. … And the Lord said, I will destroy man whom I have created from the face of the earth; both man, and beast, and the creeping thing, and the fowls of the air.”

Before the time of Christ, the ancient Greeks believed that Zeus decided to drown humanity with a massive flood when he observed them becoming cruel and ignoring the demands of justice and propriety.

In the Mayan creation story, the Popol Vuh, it is written that humans were created by gods at the beginning of the world, but later grew unaware of their creators and dared to disrespect the gods. This prompted the legendary flood recorded in that culture.

The “Record of the Great Flood,” an epic poem passed down among the ethnic Yi minority of southern China, tells a similar story of the creation, moral degeneration, and mandated destruction of human beings. Only a few worthy people remained to rebuild civilization.

Folk tales from the ethnic Koreans of northeast China speak of how a brother and sister survived the flood by fleeing to the peak of Mount Paektu, today on the border with China and North Korea.

A small ethnic minority in China, the Lhoba people, resides in the Tibetan region at an average elevation of 3,000 meters (about 9,850 feet). No flood legend is recorded in their culture.

In Yao’s day, China was divided into nine states. Around these lay the “four seas” and “eight desolations” beyond them. Annals from the 12th century record that Yao’s capital stood in Ji State.

Faced with the disaster ravaging his empire, Yao searched for people who would be able to control the waters. Huan Dou, one of the unscrupulous ministers from before Yao’s ascension to the throne, recommended the minister of labor, Kong Ren.

The emperor was unimpressed and declared: “Kong Ren is a man of slick words. He is agreeable on the surface but obstinate behind the scenes. He may be superficially respectful and cautious, but he acts in opposition to the the Way and snubs the gods. He cannot be assigned to control the flood.”

Unfortunately, pointed out agricultural minister Hou Ji, no one else was available who had the skills to accept the task, so Yao was forced to appoint Kong to the position.

Later, Yao dispatched Hou Ji to pay visit to Mount Kunlun, where divine beings resided. There, he met the Lady Queen Mother of the West, who informed him that the Great Flood was an event brought about by the will of gods. 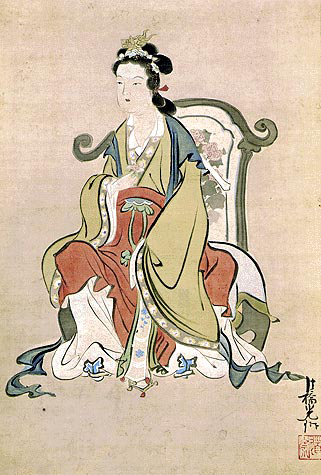 A depiction of the Queen Mother of the West from Edo-era Japan. (Kimbell Art Museum/Public Domain)

Simultaneously, the goddess explained, the keys to man’s salvation were also in divine hands. In twenty years’ time, she would return to personally assist the ruler fated to end the disaster.

In the enigmatic journey of heaven and earth, providence laid out a predestined fate.

The Floating Mountain of Yao

In Chinese folk legends about the Great Flood, it is said that the waters reached beyond the pass of Mengmen (today’s Ji County in Shanxi Province), and that the currents of the mighty Huai and Yangtze rivers reserved course and were conjoined.

The “Imperial Readings of the Taiping Era,” edited during the Song Dynasty, records that “in the state of Ji, there was a mountain called Fushan [meaning “the floating mountain”]. … in ancient times people would fasten their boats to the boulders, upon which the broken locks can still be found today.”

Only the mountain itself, floating above the waves, remained dry. Because Emperor Yao used it while avoiding the deluge, it was also called Mount Yao.

Today, there is still a Fushan County in the mountainous province of Shanxi, located in northern China.

The San Miao peoples, residing in a critical territory between the great lakes of central China, were descendants of Chi You, a fearsome ancient tribal chief. They are related to the modern Hmong people of southern China and southeast Asia. 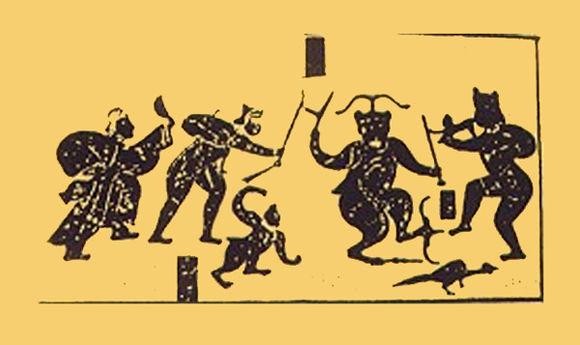 Primitive Chinese art depicting a battle against Chi You. The tribal leader is the large figure depicted at center right. (PD-Art)

Governing the region were Huan and his son, both violent and unbenevolent men who wrecked traditional practices. They had long schemed of insurrection, and the flood gave them their chance. With China in chaos due to the flooding, Huan Dou led the powerful San Miao to rise up in rebellion. The rogue’s forces attacked weaker neighbors and seized their land.

Hou Ji was dispatched to confront Huan Dou and the San Miao. He engaged the rebels in a decisive battle at Danshui, where they were roundly beaten. After the rebels capitulated, Huan Dou was exiled to Mount Chong. Tyranny and torture were abolished in the San Miao region, and victims of the uprising had their land returned to them.