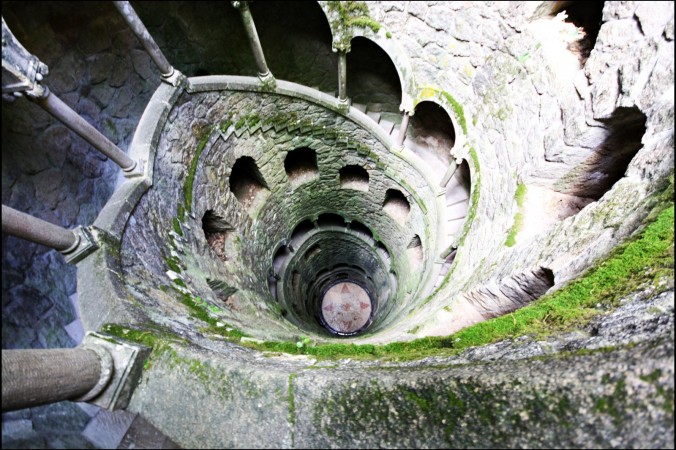 In Beyond Science, Epoch Times explores research and accounts related to phenomena and theories that challenge our current knowledge. We delve into ideas that stimulate the imagination and open up new possibilities. Share your thoughts with us on these sometimes controversial topics in the comments section below.

Located near the historic center of Sintra, Portugal lies the Quinta da Regaleira- a spectacular estate that sits in a World Heritage protected landscape. While thousands of tourists flock to the castle every year to admire the unique architecture of the Quinta de Regaleira that combines Gothic, Egyptian, Moorish and Renaissance features, one of its most fascinating features is located beneath the ground – a pair of wells spiraling deep within the earth. The wells were never used, nor intended for water collection. Instead, these mysterious underground towers were used for secretive initiation rites. 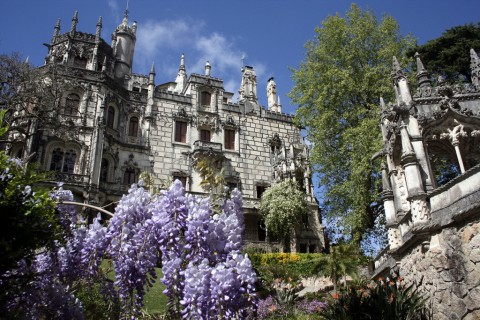 The cultural landscape upon which the Quinta da Regaleira sits dates back thousands of years. There are archaeological sites in the area dating back to the early Neolithic (5th millennium BC) and extending all the way through to the Iron Age (4th – 2nd centuries BC). The Roman occupation of the region began in the mid-2nd century BC and it was later conquered by the Moors. Sintra finally yielded to Afonso Henriques, the first king of Portugal after the conquest of Lisbon in 1147. Afonso built an imposing royal Palace there which served as a summer residence until the late 16th century. After the suppression of the Templars in 1312, the lands passed to the Order of Christ. In the late 15th century, Sintra was associated with Leonor, one of the greatest Queens of Portugal. Succeeding monarchs spent much time in the town, but after the Restoration of 1640, Sintra lost this link and the Royal palace served only as a prison for Afonso VI. Sadly, most of the built heritage of the region was destroyed in an earthquake in 1755, though there are some outstanding court and military buildings, examples of religious architecture and archaeological sites.

The Quinta da Regaleira is a vast estate that sits within this historical landscape. It has had many owners throughout the years, each contributing their own personal touch. But it was not until 1904, after being sold to António Augusto Carvalho Monteiro, a wealthy Portuguese entomologist, that the estate was transformed into a unique palace adorned with symbolic carvings associated with Masonry, the Knights Templar, and the Rosicrucians.

Gargoyles perch on the rooftop of the Quinta de Regaleira. (Daniel Boa Nova/Flickr) 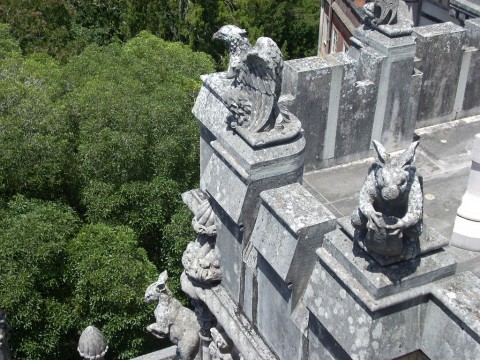 The Quinta de Regaleira estate, which is sometimes referred to as “The Palace of Monteiro the Millionaire” after its latest owner, consists of a palace and chapel with exquisite décor including frescoes, stained glass windows, and lavish stuccoes. The estate grounds feature lakes, grottoes, wells, benches, fountains, and an extensive and enigmatic system of tunnels that connect to two spiraling wells.

A system of tunnels and caves connect to two deep and spiraling wells. (Wikipedia)

The pair of wells, known as the ‘Initiation Wells’ or ‘Inverted Towers’, consist of ‘winding stair’ architecture, which carries symbolic meaning including the death/rebirth allegory common to many hermetic traditions.

One of the wells contains nine platforms, which are said to be “reminiscent of the Divine Comedy by Dante and the nine circles of Hell, the nine sections of Purgatory and the nine skies which constitute Paradise.” A smaller well, called the “Unfinished Well,” contains a set of straight staircases, connecting the ring-shaped floors to one another. It is believed that the spacing of the landings, as well as the number of steps in between were dictated by Masonic principles.

The Initiation Well consists of a spiraling staircase with nine platforms. (Nieos/Flickr) 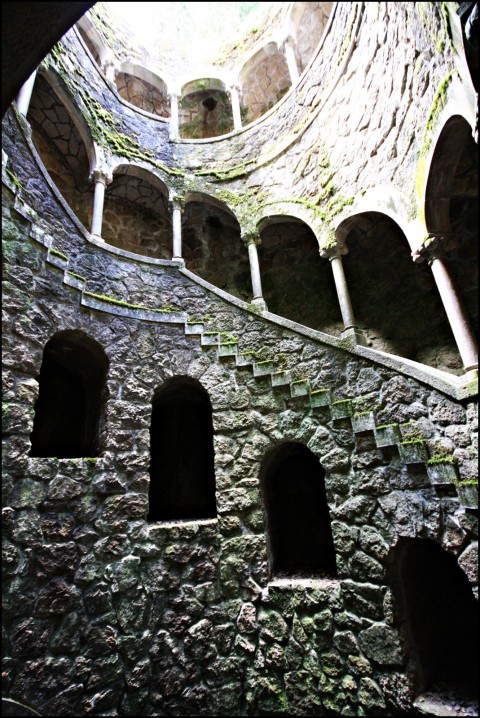 At the bottom of the well there is a compass over a Knights Templar cross, which is said to have been Monteiro’s herald and a sign of his Rosicrucianism. Very little is known about how the wells were used and what exactly went on there, though it is clear to see that great effort went into their planning and construction.

The bottom of the Initiation well at Quinta da Regaleira. (Wikimedia Commons) 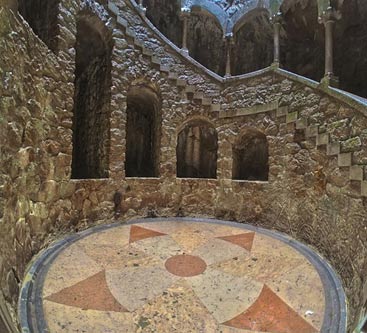 The beauty and symbology of the Quinta de Regaleira is like an open window into the past, and one of the last buildings in Sintra that carries the memory of the region’s rich and varied history. The initiation wells leave one to wonder about the events that once transpired there.

Republished with permission. Read the original at Ancient Origins.

Visit the Epoch Times Beyond Science page on Facebook, and subscribe to the Beyond Science newsletter to continue exploring the new frontiers of science

*Lead image of the initiation well by Neios via Flickr

France appoints first envoy for Indo-Pacific, to focus on cooperation with India

5 days ago union for peace

6 days ago union for peace

6 days ago union for peace