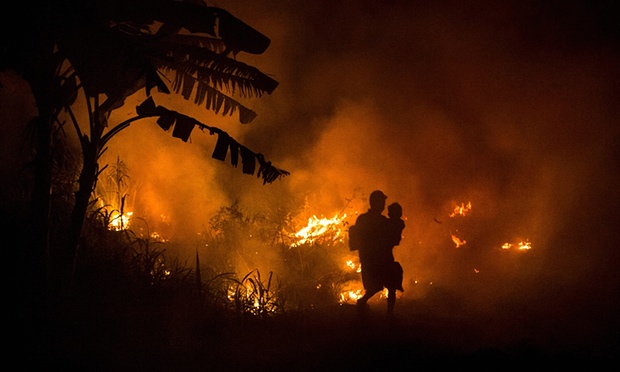 I’ve often wondered how the media would respond when eco-apocalypse struck. I pictured the news programmes producing brief, sensational reports, while failing to explain why it was happening or how it might be stopped. Then they would ask their financial correspondents how the disaster affected share prices, before turning to the sport. As you can probably tell, I don’t have an ocean of faith in the industry for which I work. What I did not expect was that they would ignore it.

A great tract of Earth is on fire. It looks as you might imagine hell to be. The air has turned ochre: visibility in some cities has been reduced to 30 metres. Children are being prepared for evacuation in warships; already some have choked to death. Species are going up in smoke at an untold rate. It is almost certainly the greatest environmental disaster of the 21st century – so far.

And the media? It’s talking about the dress the Duchess of Cambridge wore to the James Bond premiere, Donald Trump’s idiocy du jour and who got eliminated from the Halloween episode of Dancing with the Stars. The great debate of the week, dominating the news across much of the world? Sausages: are they really so bad for your health?

What I’m discussing is a barbecue on a different scale. Fire is raging across the 5,000km length of Indonesia. It is surely, on any objective assessment, more important than anything else taking place today. And it shouldn’t require a columnist, writing in the middle of a newspaper, to say so. It should be on everyone’s front page. It is hard to convey the scale of this inferno, but here’s a comparison that might help: it is currently producing more carbon dioxide than the US economy. And in three weeks the fires have released more CO2 than the annual emissions of Germany.

‘The great debate of the week, dominating the news across much of the world? Sausages: are they really so bad for your health?’ Photograph: Abdul Qodir/AFP/Getty

But that doesn’t really capture it. This catastrophe cannot be measured only in parts per million. The fires are destroying treasures as precious and irreplaceable as the archaeological remains being levelled by Isis. Orangutans, clouded leopards, sun bears, gibbons, the Sumatran rhinoceros and Sumatran tiger, these are among the threatened species being driven from much of their range by the flames. But there are thousands, perhaps millions, more.

One of the burning provinces is West Papua, a nation that has been illegally occupied by Indonesia since 1963. I spent six months there when I was 24, investigating some of the factors that have led to this disaster. At the time it was a wonderland, rich with endemic species in every swamp and valley. Who knows how many of those have vanished in the past few weeks? This week I have pored and wept over photos of places I loved that have now been reduced to ash. 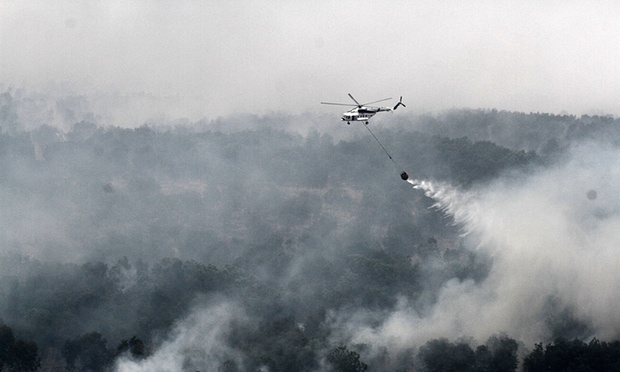 Nor do the greenhouse gas emissions capture the impact on the people of these lands. After the last great conflagration, in 1997, there was a missing cohort in Indonesia of 15,000 children under the age of three, attributed to air pollution. This, it seems, is worse. The surgical masks being distributed across the nation will do almost nothing to protect those living in a sunless smog. Members of parliament in Kalimantan (Indonesian Borneo) have had to wear face masks during debates. The chamber is so foggy that they must have difficulty recognising one another.

It’s not just the trees that are burning. It is the land itself. Much of the forest sits on great domes of peat. When the fires penetrate the earth, they smoulder for weeks, sometimes months, releasing clouds of methane, carbon monoxide, ozone and exotic gases such as ammonium cyanide. The plumes extend for hundreds of miles, causing diplomatic conflicts with neighbouring countries.

Indonesia burning: forest fires predicted to be worst on record

Why is this happening? Indonesia’s forests have been fragmented for decades by timber and farming companies. Canals have been cut through the peat to drain and dry it. Plantation companies move in to destroy what remains of the forest to plant monocultures of pulpwood, timber and palm oil. The easiest way to clear the land is to torch it. Every year, this causes disasters. But in an extreme El Niño year like this one, we have a perfect formula for environmental catastrophe.

The president, Joko Widodo, is – or wants to be – a democrat. But he presides over a nation in which fascism and corruption flourish. As Joshua Oppenheimer’s documentary The Act of Killing shows, leaders of the death squads that helped murder a million people during Suharto’s terror in the 1960s, with the approval of the west, have since prospered through other forms of organised crime, including illegal deforestation.

They are supported by a paramilitary organisation with three million members, called Pancasila Youth. With its orange camo-print uniforms, scarlet berets, sentimental gatherings and schmaltzy music, it looks like a fascist militia as imagined by JG Ballard. There has been no truth, no reconciliation; the mass killers are still treated as heroes and feted on television. In some places, especially West Papua, the political murders continue.

Those who commit crimes against humanity don’t hesitate to commit crimes against nature. Though Joko Widodo seems to want to stop the burning, his reach is limited. His government’s policies are contradictory: among them are new subsidies for palm oil production that make further burning almost inevitable. Some plantation companies, prompted by their customers, have promised to stop destroying the rainforest. Government officials have responded angrily, arguing that such restraint impedes the country’s development. That smoke blotting out the nation, which has already cost it some $30bn? That, apparently, is development.

From rainforest to your cupboard: the real story of palm oil – interactive

Our leverage is weak, but there are some things we can do. Some companies using palm oil have made visible efforts to reform their supply chains; but others seem to move more slowly and opaquely. Starbucks, PepsiCo and Kraft Heinz are examples. Don’t buy their products until you see results.

On Monday, Widodo was in Washington, meeting Barack Obama. Obama, the official communiqué recorded, “welcomed President Widodo’s recent policy actions to combat and prevent forest fires”. The eco-apocalypse taking place as they conferred, which makes a mockery of these commitments, wasn’t mentioned.

Governments ignore issues when the media ignores them. And the media ignores them because … well, there’s a question with a thousand answers, many of which involve power. But one reason is the complete failure of perspective in a de-skilled industry dominated by corporate press releases, photo ops and fashion shoots, where everyone seems to be waiting for everyone else to take a lead. The media makes a collective non-decision to treat this catastrophe as a non-issue, and we all carry on as if it’s not happening.

At the climate summit in Paris in December the media, trapped within the intergovernmental bubble of abstract diplomacy and manufactured drama, will cover the negotiations almost without reference to what is happening elsewhere. The talks will be removed to a realm with which we have no moral contact. And, when the circus moves on, the silence will resume. Is there any other industry that serves its customers so badly?

A fully linked version of this article can be found at monbiot.com