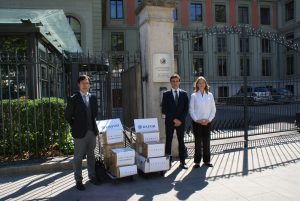 In just 5 years volunteers and supporters in more than 50 countries and regions helped collect 2.5 million signatures, making it the second largest petition in world history, urging the UNHRC to take long overdue action against illegal organ harvesting from Falun Gong practitioners and other prisoners of conscience.

Washington, August 2, 2017. Representatives of DAFOH hand delivered paper petitions to the United Nations in Geneva. More than 2.5 million people signed the DAFOH petition in the past five years urging the UNHCHR to act to investigate and help end forced organ harvesting from prisoners of conscience in China. The cardboard cartons holding paper petitions were delivered by a delegation of doctors and lawyers on July 20, 2017.

This civil petition, the second largest in world history, also requests an immediate end to the 18 year religious persecution of Falun Gong practitioners, the primary victims of illicit organ seizures. DAFOH is asking the UN Human Rights Commission to create a specific commission to act as a working group within the United Nations dedicated to ongoing objective investigations of China’s transplant medicine and organ donation system.

Deeply concerned about repeated and unsubstantiated claims of reform by Chinese authorities in the global media, survivor testimonies as evidence, and reports of implausible transplant numbers, DAFOH initiated the petition to the UN High Commissioner in 2012, highlighting the involvement of the Falun Gong as the largest group of religious prisoners of conscience in China. Organ harvesting of this group is reportedly systematic and found to occur not in select regions of China, but nationwide. Contributing factors are the large numbers of Falun Gong persecuted and detained in prisons since 1999, the non-resistive and non-violent practices of the group, and the general good health of adherents due to the benefits of the practice making them a vulnerable target. Attention to the persecution of the Falun Gong in the media in recent years has also served to raise awareness of several other prisoner of conscience groups in China such as Uighurs, Tibetans, House Christians and human rights activists. The success of the petition, now in its fifth year, is the result of strong support by volunteers around the globe. It calls for immediate action as China must not be granted immunity as an island devoid of human rights.

DAFOH will continue the petition drive annually. For 2017, petition forms can be found at https://dafoh.org/petition-to-the-united-nations/.

Paper petition forms may also be scanned and emailed to urgent-action@ohchr.org and civilsociety@ohchr.org.

The United Nations has a significant history of acknowledging these crimes against humanity.

As early as 2003, the Special Rapporteur for Extrajudicial, Summary or Arbitrary Executions, Asma Jahangir, reported awareness of the victim group, being “alarmed by deaths in custody in China. Reports describe harrowing scenes in which detainees, many of whom are followers of Falun Gong, died as a result of severe ill treatment, neglect or medical inattention [after torture]. The cruelty and brutality of these alleged acts of torture defy description.”
In 2006, UN Special Rapporteur Manfred Nowak reported that 66 of allegations of torture, rape and violence in detention targeted Falun Gong, statistically the largest persecuted group in China, numbering nearly a million people nationwide; the second victim group followed with 11.
Then, in 2012, the NGO, International Educational Development (IED), raised the issue of forced organ harvesting of Falun Gong practitioners at the UN Human Rights Council meeting and asked for investigation.
In 2014 Canada’s human rights adviser to the UN, Anne-Tamara Lorre, set a precedent during the Interactive Dialogue on Freedom of Religion at the UN in Geneva in 2014. Lorre made an unprecedented acknowledgement of reports of unethical organ harvesting in China which prompted responses from specific countries, and staunch denials by Chinese regime authorities who categorically rejected her comments.
The threat of forced organ harvesting in China continues today, despite promises of reforms by Chinese officials: In July 2017, DAFOH interviewed a Falun Gong practitioner who had been detained in China in June, 2016. The man reported he was forcibly blood tested upon entering prison; on the same day an officer of the notorious 610-Office threatened him to harvest his organs.

The regime has repeatedly failed to endorse a mass of evidence or mention living prisoners of conscience as the primary victims. In fact, the regime denied use of organs from executed prisoners altogether until 2005, then when denial seemed irrefutable admitted to the practice in 2005. The health official responsible for organ transplants, Dr. Huang Jiefu, is quoted in the media in 2013 saying to phase out the practice in 2015. Huang then changed his stance again, saying that the current system of sourcing organs from prisoners should be expanded rather than retired, and prisoner‘s organs be anonymously combined with voluntary citizen donations, a move critics believe is an attempt to whitewash ongoing abuse. China‘s organ procurement system remains highly secretive and cannot be compared with altruistic public organ donation systems in western countries.

In 2016, U.S. Congressman Chris Smith, reported “strong evidence that Falun Gong practitioners were singled out for organ harvesting.” Florida Congresswoman Ileana Ros-Lehtinen, stated that the “ghoulish and inhumane practice of robbing individuals of their freedom, throwing them in labor camps or prisons, and then executing them and harvesting their organs for transplants is beyond the pale of comprehension and must be opposed universally and ended unconditionally.” Congress unanimously supported House Resolution 343 as a first step towards protective legislation.

Reports that detail evidence of forced organ harvesting in China have prompted many countries and regions, including Israel, Taiwan, Italy, and Spain, to pass legislative and regulatory changes that criminalize collusion, forbid the training of Chinese transplant surgeons and stop citizens from traveling to China as transplant tourists.