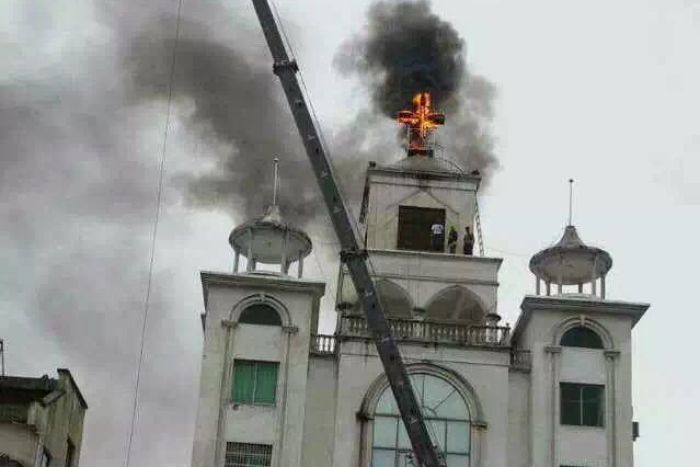 [ABC news] China’s governing Communist Party is set to launch a nationwide crackdown on Christianity. Correspondent Matthew Carney travels through the country and speaks to churchgoers who are worried they could soon be arrested.

The Communist Party has just enacted much tougher laws that criminalize Christians if they do not pledge loyalty to the state.

Chinese President Xi Jinping has warned that all religions now have to become “Chinese” and the new laws will attempt to bring churchgoers and their leaders under party control.

The northern fringes of Beijing are some of the poorest areas in the capital, home to migrant workers who come from all over China, an itinerant community where the state offers little support.

But it is where the church is growing the fastest.

After weeks of negotiation, we have been given access to one small Protestant underground, or home church, and we can hear the sounds of prayers well before we walk in.

It operates in a shop-front and has about 50 members.

Wang Zeqing is the self-taught pastor and was a simple farmer until he got the calling 20 years ago.

He says the new laws will be the congregation’s greatest challenge, but that their faith will not falter.

“A person who truly believes in Jesus Christ will not lose their faith or become weak due the changing environment,” he says.

“God is in charge and he will not let the churches suffer.”

There are hundreds if not thousands of these churches all over Beijing. They operate in attics, homes, offices, basements and parks out of view of the authorities.

Just in the small neighbourhood we are visiting there are five places of worship.

The new laws will put the state firmly in charge, giving the Communist Party the ability to hire and fire church leaders and change religious doctrine to make it more Chinese.

That means churchgoers will have to pledge loyalty to the Communist Party first, which Pastor Wang says cannot be done.

“Jesus Christ is my only belief, my only loyalty is to Jesus Christ,” he says.

“God says you should love your enemies, if they are hungry give them food to eat if they are thirsty give them water to drink, so we will pray for the non-believers.

“Let the spirit of Jesus move them and conquer them.”

Pastor Wang is careful about what he says. He has been arrested before but there is defiance in this small congregation, and on my visit they pray for an hour against the new laws.

The churchgoers don’t want to provide their names or the exact location.

An elderly lady who leads the prayers shouts: “We urgently prayer for protection for the church and ask for God’s mercy from the new laws from the Party.”

A rugged-looking older man rises from his seat and responds with arms outstretched.

“Dear Lord we face harassment from the pagans, the new regulations may destroy our churches, the leaders of our country lack knowledge of God. Lord please protect and real churches and eliminate the pagans,” he says.

Church cross on fire in China

PHOTO: The governing Communist Party in China is set to launch a nationwide crackdown on the church. (Supplied: Wayne Mcallister)

The churchgoers say they are not afraid. A small, fragile-looking lady in her 30s says in the face of the Communist Party, God is all powerful.

“I am not scared, I have God and I am happy. God will listen. The spirit lives inside us,” she says.

There is good reason to be afraid. Chinese authorities have already started the crackdown in the Christian heartland in the southern province of Zhejiang.

It’s been extensive and brutal. In the past two years they have torn down nearly 2,000 crosses and in some cases demolished churches.

Church leaders and their followers have been arrested and imprisoned.

There’s also good reason to why the Communist Party is threatened by the Church.

Some say there are 100 million Christians in China — that’s more than Communist Party members.

The Chinese Government admits there are about 25 million Christians registered at state-run churches where pastors are appointed by the state and theology approved by the governments Religious Affairs Bureau.

But the big worry for the Party is the unregistered worshippers in the underground churches.

Accurate estimates are difficult to get, but experts say their numbers vary between 40 million and 70 million.

And they say by 2030 China will have the world’s biggest Christian population.

The real alarm for the Communist Party is that this signals their new ideology, the China dream ‘prosperity for all’, is failing and people are finding a deeper meaning, a salvation in religion.

Across Beijing, church leaders are waiting for the first round of arrests and detentions. It seems the harassment has already begun. When we tried to interview outspoken pastor Xu YongHai, 30 security personnel turned up to make sure we did not.

The police pulled over our car and checked our documentation while security officials filmed us. They instructed us to leave.

Pastor Xu managed to send us video of police monitoring his prayer service and later we managed to speak with him through a video link.

He said he expected more harassment and arrests to follow but said they would continue doing what they are doing.

“We may change location and times, we will not stop, we will be strong,” he said.

The Communist Party has tried to destroy the church before and failed.

Pastor Xu said the new laws would only succeed in pushing the church further underground and swelling the ranks of the faithful.