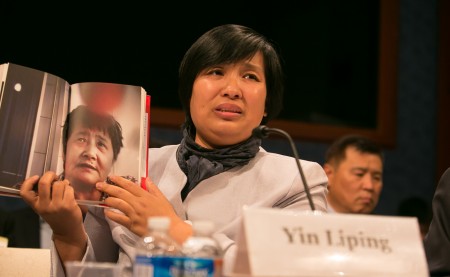 Yin Liping testifies before the Congressional-Executive Commission on China, April 14, on “China’s Pervasive Use of Torture.” Ms. Yin is a Falun Gong practitioner who survived torture, forced labor, and sexual violence in Masanjia and other forced labor camps in China.

WASHINGTON—The Congressional-Executive Commission on China (CECC)’s hearing on April 14 on systematic torture commonly used in Communist China’s detention facilities was sobering and disturbing. The witnesses provided graphic detail of what they had personally seen and experienced.

The primary purpose of torture in China is to coerce confessions to crimes. It is also employed to breakdown the subject’s will and humiliate him or her. For example, it has been employed extensively on Falun Gong adherents to make them renounce their beliefs and practice.

Chairman Chris Smith (R-N.J.) convened the meeting by first recounting the shocking torture of lawyer Gao Zhisheng, who has been the subject of several hearings in the past. Gao was tortured because he “dared to represent persecuted Christians and Falun Gong [practitioners],” said Chairman Smith.

Gao remains in China under house arrest. Geng He, Gao’s wife, who now lives with the family in the U.S., submitted written testimony.

Her testimony describes that beginning in 2006 until his provisional release in 2014, Gao was subjected to many forms of torture, including beatings, and was shocked for hours with an electric baton all over his body, including his genitals.

“A country with China’s global leadership aspirations should not engage in horrific practices so thoroughly condemned by the international community,” Smith said.

Senator Marco Rubio (R-Fla.), cochairman of CECC, provided a written opening statement, where he states that Gao “suffered unimaginable abuse.” He mentioned that other human rights lawyers and activists, who were rounded up last July during a nationwide sweep, were being held in “black jails,” which are secret (illegal) detention locations out of sight from the scrutiny of others and the public. Some of these human rights lawyers “have been held incommunicado for nearly nine months making them especially vulnerable to mistreatment or even torture,” he wrote.

Yin Liping, a Falun Gong practitioner from Liaoning Province, testified in person. In September 2000, she had been sent to Masanjia Forced Labor Camp for a hunger strike because she refused to abide to the Chinese regime’s policy of “transformation,” a term for forcing Falun Gong practitioners to give up their belief. She testified:

“I was cuffed to a bed and injected with unknown drugs for over two months. This caused me to temporarily lose my vision. I was also put through involuntary ultrasound, electrocardiogram, and blood tests at a nearby hospital. They injected two or three bottles each day. As a result, I developed endocrine disorders, incontinence, and had blood in my urine. In addition, their frequent violent force-feeding almost suffocated me.”

On April 19, 2001 Yin was, with eight other female practitioners, subject to a frightening night of sexual assault by male prisoners and guards.

“Four or five male inmates threw me onto the bed. Some held my arms. Some held my legs. One younger man sat on me and beat me. I became dizzy and passed out. When I [became conscious], three men were lying beside me. I realized that I had been videotaped when I was sexually attacked and humiliated by gangsters of inmates,” she said.

Holding up the book, she said, “Three toothbrushes were tied together, and inserted into and stirred up female private parts. I saw with my own eyes a group of men beating an elderly Falun Gong practitioner in the restroom. They forcefully inserted a broken broom stick into her private part.”

Yin’s story is featured in Du Bin’s documentary, “Above the Ghost’s Heads: The Women of Masanjia Labor Camp.” In August 2013, she escaped from China to Thailand. In December 2015, she was granted refugee status in the United States.

Jigme Gyatso (a.k.a. Golog Jigme), Tibetan monk, was originally from Sichuan Province and later worked in Gansu Province with filmmaker Dhondup Wangchen, who was imprisoned six years for making a film on Tibetan life. Jigme was also detained and severely tortured for two months in 2008, and abused again but less brutally treated in 2009 and 2012. He summarized the first incarceration of 2008:

“For one month and 22 days I was tortured continuously. I was forced to sit in the ‘tiger chair’ … day and night. … My arms were handcuffed in front of me on a small metal table, and my legs were bent beneath the seat and strapped to the chair with iron cuffs. My joints suffered horribly and at one point my feet became so swollen that all my toenails fell off. I still have scars on my wrists and ankles from when I was turned backwards in the chair and suspended from the ceiling, for hours at a time. I was deprived of sleep and given very little to eat, and felt unbearably thirsty…”

At the U.N. Committee against Torture review of China in Geneva last November, Jigme Gyatso heard a Chinese official defend the tiger chair as providing protection and safety of the detainees. “I spent days and nights in such a chair; it was horrific torture,” he said.

At the end of the hearing, Chairman Smith remarked that the contention that these restraints are for the protection of the detainee was “absurd.”

Human Rights Watch wrote about a death row inmate who had his hands shackled to his feet day and night for nearly eight years after his sentence to death row. He was exonerated because of “insufficient evidence,” probably because at the same time, the regime was publicly pledging to stop wrongful convictions based on forced confessions. After his release, the individual suffered from many physical disabilities, post-traumatic stress disorder and depression.

Jigme Gyatso said he was also beaten with wooden batons and electronic devices. His hands were shackled behind his back and he was hung from a pipe on the ceiling.

He was never formally arrested or charged and was never put on trial. He was held incommunicado without access to a lawyer or medical treatment. In his third detention in 2012, he was certain the authorities were going to kill him. He managed to escape and, after hiding for 20 months, fled to India and eventually received asylum in Switzerland.

China is not lacking a sound legal framework with legal protections for detainees that prohibit coerced confessions, torture and abuse, particularly from the measures adopted between 2009 and 2013. But Chinese law and international legal norms are ignored while torture remains routine.

China ratified the United Nations Convention against Torture in 1988, but official campaigns in the 1990s to curb torture were not effective. “Even Chinese officials had characterized torture in detention as ‘common,’ ‘serious,’ and nationwide’ … and had long been endemic to China’s criminal justice system,” said Sophie Richardson, who is the China director for Human Rights Watch.

In 2012, the PRC’s Criminal Procedure Law was revised “to exclude suspects’ confessions and written statements obtained through torture,” Richardson said. Procurators and judges are bound by the “exclusionary rule,” which prohibits the use of evidence directly obtained through torture. The regime made claims that the use of coerced confessions decreased 87 percent in 2012, and torture and deaths in custody were dramatically reduced.

However, the police wield enormous power over the judiciary and the criminal system does not have mechanisms in place to independently observe police interaction with suspects. “Lawyers cannot be present during interrogations and suspects have no right to remain silent, violating their right against self-incrimination. Procurators and judges rarely question or challenge police conduct,” according to Richardson.

The courts rely extremely on confessions as the primary form of evidence in criminal cases, said Margaret Lewis, professor of law, Seton Hall University. In nearly every criminal trial, no witnesses are called. “The judges focused almost solely on statements made by the defendant while in custody,” her written testimony states.

Last September, the Ministry of Public Security announced the gradual expansion of videotaping of interrogations to eventually cover all criminal cases. This should be welcome news as cameras could act as a disincentive for police coercive practices. However, “videotaped interrogations are routinely manipulated, such as first torturing the suspects and taping the confession,” said Richardson, who also said that “detainees often live in terror” of being taken from the detention centers to where the police can more easily inflict torture.

Lewis was invited to view an interrogation room in a Beijing police station last October, where the staff were eager to point out the videotaping technology. But she couldn’t help notice the slogan “truthfully confess and your body will feel at ease;” the Chinese characters were displayed in front of the tiger chair. She noted that a suspect undergoing prolonged questioning would understand that he or she had no right to remain silent.

Human Rights Watch searched approximately 158,000 criminal verdicts published online between Jan. 1, 2014 and April 30, 2014 and found 432 where torture had been alleged. Of the 432 cases, only 23, or 5 percent, resulted in evidence being thrown out by the court; none led to acquittal of the defendant, said Richardson. Very few judges investigated torture allegations in any detail. The data results are in Human Rights Watch’s May 13, 2015 report “Tiger Chairs and Cell Bosses: Police Torture of Criminal Suspects in China.“

The report also included interviews with former detainees, who told Human Rights Watch that police interrogations during pre-trial detention included “being hung by the wrists, being beaten with police batons or other objects, and prolonged sleep deprivation,” said Richardson.

The burden of proof is left to the detainee that torture had taken place, Richardson said. In the court verdicts Human Rights Watch analyzed, “not a single defense witness or expert witness testified regarding the torture claims.”