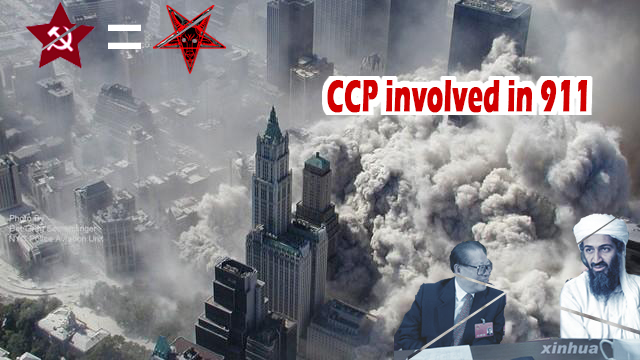 Last spring, President George W. Bush faced his first major foreign-policy challenge when an American EP-3E surveillance plane was hit by a Chinese fighter and forced to land on Hainan Island. Tensions flared even further as China detained the 24 American crewmen for 10 days, the standoff eventually resolving after both plane and crew were finally released. Still, U.S.-Sino relations remained ominously chilly throughout the year, until they were overshadowed by the events of Sept. 11.

Post 9-11, the Bush administration’s focus has, of course, been riveted on the terror war, and China has gone off the main radar. But despite Beijing’s public support for the coalition’s war on terror, regular rumblings of Chinese complicity with the terrorists have surfaced. Among them was a WND report of some Chinese fighters assisting the Taliban.

Now, author Gordon Thomas has written a book claiming that Beijing had an actual role in the Sept. 11 attack on America. In “Seeds of Fire,” Thomas purports to show how Beijing is positioning itself to become America’s “new major enemy.”

An investigative journalist from Ireland and author of 38 books, Thomas points out that on Sept. 11, a transport plane from Beijing landed in Kabul. A Chinese delegation had gone to Afghanistan to sign a deal with the Taliban – reportedly brokered by Osama bin Laden – to provide the Afghans with missile-tracking technology, state-of-the-art communications and air-defense systems. In return, says Thomas, the Taliban would order Muslim separatists in northwest China to stop their activities.

In a Sept. 13 report, the Washington Post confirmed that Beijing had just signed a deal with the Taliban to provide Afghanistan “with much needed infrastructure and economic development assistance.”

Due to the fall of the Taliban at the hands of opposition forces and the United States, however, “the goods were never delivered,” Thomas told WorldNetDaily.

The delegation, says Thomas, included senior officers of the People’s Liberation Army and the Bureau of State Security, as well as managers from two of China’s leading defense contractors.

In his book, Thomas contends that hours after the plane landed in Kabul, CIA Director George Tenet received a coded “red alert” message from Israeli Mossad agents that presented a “worst case scenario” – that China would use a surrogate, bin Laden, to attack the United States.

Thomas also claims that the head of Pakistan’s intelligence service was in Washington to meet with Tenet on Sept. 11, and that he briefed Tenet that day on the links between bin Laden and China.

The intelligence agent “told [Tenet] that China had made a decisive decision,” wrote Thomas. “It was prepared to infuriate America and its allies in supporting bin Laden and the Taliban because Afghanistan fitted into China’s own long-term strategic plans.”

Saying that bin Laden has traveled to China numerous times to meet with officials there, Thomas contends that “almost certainly he talked to them about obtaining” material to build weapons of mass destruction.

China’s President Jiang Zemin, adds Thomas, waited three days to contact Bush about the Sept. 11 attack and told the U.S. president that, vis-?-vis the war on terrorism, China would find itself in a “difficult situation, given our well-known position of opposing any interference in the internal affairs of any country.”

Washington sources say that Bush “gritted his teeth and said he would push on without China,” Thomas wrote.

The author also cites what he calls the “happy parties in the streets of Beijing” following the 9-11 attacks.

“They’re selling videos there with commentary saying, ‘America had it coming,’” said Thomas. “Their message is: ‘America can be defeated.’”

On another note, Thomas believes President Bush’s decision to pull out of the ABM treaty will cause Russia and China to strengthen their ties – to the detriment of the United States.

“It’s in China’s interest to see the U.S. destablilized,” he added.