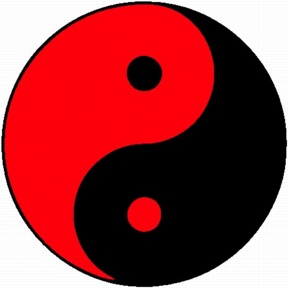 The Tai Ji simbol, right in front of the astronomers ?

An ancient Taoist saying goes like this:”Tao created one, one created two, two created three, and three created the myriad of things”. The Taoists, with their simbol of Yin and Yang (two oposites), talk about being sincer until we become a true man and we can go back to original true self, belief wich enriched Asian culture for about two milennia.

But a while back astronomers took a good look at the sistem of the two ”super-clusters”, Laniakea and Perseus-Pisces and they could notice that the universe is in line with the quantum physics theories and the Tai Ji truth, which all say that matter from the microscopic to the macroscopic, follows good defined movement, which are montioned by the same force.
If we carefully analyze the structure of the two ”super-clusters”, each with his own great magnet – maybe the force in the macroscopic universe – and the flux that two of them follows, we can observe that the image created resembles very much the Tai Ji and the movement of his two substances Yin and Yang – which are all over.

The fluxes of movement the two ”super-clusters” are also mobilized by a ”great magnet”, resembling the summit of the Tai-Ji truth, or black holes. At least in appearances, the Taoist theory speaks about touching the Void, the place where matter is so microscopic until nothing exists anymore – which resembles a black whole.

But the concept of true corelation between smaller and enourmous existence, the Tai Ji (Yin and Yang) is very ancient, yet it could be something for scientists to study. For example the quantum – physics genius, Niehls Bohr, promoted this theory since around the year 1922. Niels Bohr emblems includes the Tai Chi simbol, which denotes that the genius whose named is found in the Table of Elements from chemistry, includes the Tai Ji simbol of Yin and Yang.

While the taoist truth says that the Tai Ji is a small Cosmos, Niels Bohr studied the atomic structure of electrons around a nucleus, studied further by modern scientists until the depth of quarcks and neutrinos, the smaller matter known to man. They state that minuscule particles also follows regular movemment pattern, which could be the same in every dept of matter, and their movement which follows strict laws and good defined existence.

Even the simbol used by the quantum physics pioneer, Niels Bohr, which include the taoist simbol and a long standing principle,”Contraria sunt Complementia”, (”Oposites complement eachother” translated from latin) suggestes that. In a resembling way, the theory of Tai Ji also states that the two opossing matters, Yin and Yang, are complementing and strengthening eachother. But looking further at the macroscomic, at the image of the two ”super-clusters”, Laniakea and Perseus-Pisces, we can find a resemblance both in aparent form and pattern of complementary movement.

Even when looking at the superficial image captured by the astronomers of the small cosmos formed by Laniakea and Perseus-Pisces we can also see a resemblance with the Tai Chi simbol and his two parts – Yin and Yang.

Now let`s talk abouth the Cosmos. A team of scientists collected a huge amount of data about the 8.000 galaxies discovered around The Milky Way. They traced in outer space the pozition of every galaxy and, for the first time, it was shown that our galaxy included a much bigger sistem of galaxies – a ”super-cluster” called Laniakea. The taoist truth also talks about the fact that the universe also contains life and water, forms of existence and other lives.

The Univers can be seen like a complicated network of galaxies, a cosmic wheel, with some of them being almoust empty of stars in appearence, resemblind dark black wholes, while in the meantime other areas are filled very densly with galaxies, composing regions known as ”super-clusters”. ”Super-clusters” are the most tallest structures found in the Univers, but scientists, at the momment, have found problems trying to find out the exact ends of one another.
To mark the ”super-cluster” that also include the Earth, a team of scientist from Hawaii studied the movemment of galaxies from around us with a precision never seen before in the past.

Even if the whole Univers is extended rapidly there also exists a gravitational force that acts in a opposite manner to this acceleration movement of cosmic wheels – also a resemblance with the movement of the two substances of the Tai Ji, Yin and Yang, which revolves around one another. Eliminating this cosmic expanse from the first part of the analyze, the scientists have determined that the galaxies that atracts the Milky Way and they could also figure it out the distance between them, thing that permitted them initially to creat a map that contains a representation of the cosmic flux and of the movement direction of the galaxies. Using the data provided by this celestial movement, the scientists created a new cosmic map that includes new galaxies discovered in the Univers.

If we analyze in depth the ”super-cluster” that hosts the Earth, we can see that the majority of this galaxies are attracted towards a dense centre named the ”Great Magnet”. All the galaxies are moving towards this center that dominates the area from the Univers that hosts the Earth. Resembling this the taoist simbol of Yin and Yang suggests that the matter is powered by the two extremes – the dots in the Tai Ji Simbol.

So, these being said, we can conclude that the small Cosmos of Laniakea and Perseus-Pisces that we know is fundamentally connected with the Tai Ji of ancient China? 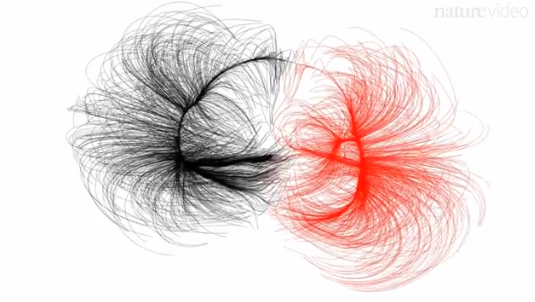