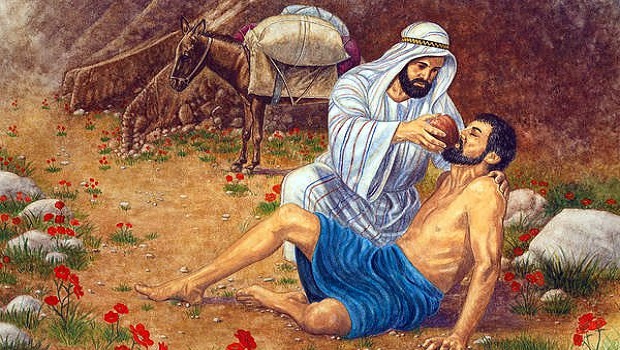 Perhaps, Christianity is one of the most recognized religions in the world. There are many good parables in the Bible. One of them is called, “The Good Samaritan”. From the the New International Version(NIV), it is Luke 10:25-37.

The Parable of the Good Samaritan
25 On one occasion an expert in the law stood up to test Jesus. “Teacher,” he asked, “what must I do to inherit eternal life?”

28 “You have answered correctly,” Jesus replied. “Do this and you will live.”

29 But he wanted to justify himself, so he asked Jesus, “And who is my neighbor?”

30 In reply Jesus said: “A man was going down from Jerusalem to Jericho, when he was attacked by robbers. They stripped him of his clothes, beat him and went away, leaving him half dead. 31 A priest happened to be going down the same road, and when he saw the man, he passed by on the other side. 32 So too, a Levite, when he came to the place and saw him, passed by on the other side. 33 But a Samaritan, as he traveled, came where the man was; and when he saw him, he took pity on him. 34 He went to him and bandaged his wounds, pouring on oil and wine. Then he put the man on his own donkey, brought him to an inn and took care of him. 35 The next day he took out two denarii[e] and gave them to the innkeeper. ‘Look after him,’ he said, ‘and when I return, I will reimburse you for any extra expense you may have.’

36 “Which of these three do you think was a neighbor to the man who fell into the hands of robbers?”

37 The expert in the law replied, “The one who had mercy on him.”

Jesus told him, “Go and do likewise.”

From this, through a universal perception, each of us can be called to be kind and helpful to those in need regardless of kin, relation, skin, or even race and culture. The creator made us individuals who are different from everyone else and He gave us a moral conscience to be better and treat one another with the greatest respect to giving each of us life.