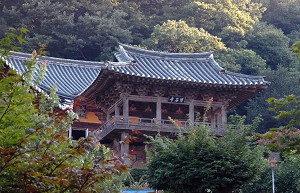 In mid-May 2007, Divine Performing Arts, established in America, concluded its world tour. Among the 81 performances, three were held in South Korea in late April. These performances deeply touched the Korean people, whose culture was heavily influenced by the Chinese culture. Many Korean Buddhist monks and monks attended the performances in Korea. Why did these Buddhist cultivators attend these performances? 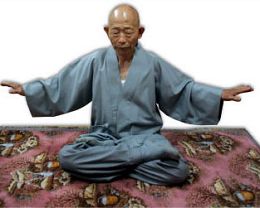 Young-Kyu Oh shared that he couldn’t stop crying during the entire performance. To understand what linked him to the performance, we have to begin with Oh’s birth.

A Mother’s Dream During Her Pregnancy

Before Young-Kyu Oh was born, his mother had already given birth to four daughters. It was the greatest misfortune for a married woman in a country that values sons over daughters. A member of the family even suggested forcing her to leave. Therefore, Oh’s mother went to the Buddhist temple to worship Buddha and ask for a son. Oh’s mother then became pregnant again.

Before Young-Kyu Oh was born, his mother had a dream where Buddha descended from heaven and gave her a book. She also dreamed about a child dancing over water and jumping inside a fire. But, the child would not drown or burn. Oh’s mother decided that this must be a special child because she worshiped Buddha. She decided to have the child study in a Buddhist temple when it grew up.

There was an elderly man in Oh’s hometown who was a house servant for King Kojong. Since the age of eight, Oh studied Chinese with him. At the time the man was already in his seventies. He studied Gyeok-Am Yu-Rok, a famous ancient Korean prophecy. An ancient Korean astronomer, Sa-Go Nam, wrote it down after a mysterious trip to Mount Kum Gang San. He was told and asked to record the prophecy by a divine being. Nam couldn’t decipher the prophecy. The written record is the Gyeok-Am Yu-Rok prophecy. The famous prophecy was named after Sa-Go Nam’s assumed name, Gyeok-Am.

The old man from Oh’s hometown taught Chinese and important principles. He once told Oh that if he could live beyond 70 years old, he would meet Buddha Maitreya who would be descending to the human realm and spreading the righteous Buddha Law. Then the world would become good again and there would be awe-inspiring changes, just as when heaven and earth were created. He told Oh that he would not live to see it happen. He also was childless and thought it to be a great pity. He said, “If you want to live long enough to meet Buddha Maitreya, you must be thoughtful of others at all times and pay filial respect towards your parents. You must not do anything illegal. You must respect everyone. The truth is that to be thoughtful of others is to be thoughtful of yourself.”

Young-Kyu Oh has always remembered these words. He has made a conscious effort to follow the old man’s advice. To be considerate and help people in need, such as carrying heavy bags for other people, has become second nature to him.

When Oh was little, one of his older sisters once made him a set of clothes for the New Year. Oh’s mother had passed away by then, and his family was not well off. Oh put on the new clothes and went to play with the neighborhood kids. When he arrived at one his playmates’ homes, he saw his little friend crying. The child’s father was addicted to gambling, leaving his mother to work as a seamstress to provide for the family. There was hardly enough income to put food on the table. When his neighborhood playmates wore new clothes for New Year, his family could not afford new clothes for her. Oh felt very sad for her, so he gave his new clothes to that child. He put his old clothes back on. Oh’s sister reproached him for it, but little Young-Kyu thought only of being a good person and living until the advent of the righteous Buddha Law.

Oh joined Buddhist temples, but the monks were only interested in soliciting alms. Seeing that the Buddhist temples were no longer a place for cultivation practice, Oh cultivated in a mountain cave. He also lived with a Taoist cultivator for some time. But, he discovered that the Taoist would throw tantrums easily over trivial matters despite the fact that he had cultivated for over 30 years. Oh decided that it would not be good for his cultivation, even if he stayed for a hundred years.

Oh searched for a genuine cultivation practice. When he was in his sixties, he decided to study the Buddhist scriptures and become a fully ordained Buddhist monk. He enrolled in a Buddhist college. One day a lecturer taught the class Nirvana Sutra, a collection of Buddha Dharma articles about what Shakyamuni had taught when he was about to reach nirvana. In his later years, Shakyamuni said that the Dharma he had taught for the past 49 years was false and is but a foundation for the genuine Dharma. He said that he would now tell his disciples the truth. In Nirvana Sutra, Shakyamuni talks about the Wheel-Turning King appearing in the Dharma-ending period. Oh said that he suddenly was on high alert when he heard the story.

His friend lives in a village near the old manor of Il-Sun Gang, the pioneer who established the Jeung San Do region. The village has about 2,000 households, and the elderly folks were Il-Sun Gang’s disciples. One time Young-Kyu Oh saw elderly folks pointing at farmland and shouting excitedly, “Buddha Maitreya has descended to the human realm Why haven’t we heard about him?”

“It was 1982. When I learned the prophecy was fulfilled, I told my friend, ‘There is no need for me to seek residence. I must travel to find Buddha Maitreya.'” Thus Oh bid farewell to his friend and wandered about in Korea, but he didn’t find Buddha Maitreya. Later, Oh suddenly remembered something Il-Sun Gang had said, “Bad luck would befall you if you seek Buddha Maitreya. If you stay put and cultivate your morality, Buddha Maitreya will come to find you.” Then Oh felt relaxed. he went to a Buddhist temple, where he endured hardships and cultivated himself. He kept thinking about improving himself.

The Nirvana Sutra also says that the Holy Wheel-Turning King is instructing Bodhisattvas and greater Bodhisattvas, who will one morning show themselves to the world and shock the world’s people, when everything would change.

Caption: Young-Kyu Oh and Beop-Ryun Cha studying one of the Falun Gong books

Gyeok-Am Yu-Rok also says that its prophecy might not be 100 accurate because Lord Buddha (Buddha Maitreya) will be the one who makes the ultimate decision. Therefore, what he will do may not be the same as the prophecy predicted. Knowing that one cannot reach consummation by following any of the existing cultivation schools, Young-Kyu Oh began to tell people his personal understandings of the Nirvana Sutra. While distributing the self-made compilations of his understanding, Oh waited for Buddha Maitreya to arrive.

But when he returned to his room, he somehow felt like going to Seoul again. he had a premonition that something wonderful was waiting for him. He decided that he shouldn’t stay at home, but he had already told Cha that he was not going. Oh had changed his mind twice, so he was embarrassed to tell Cha that he changed his mind again.

Finally Oh decided to cook some noodles for breakfast himself the next morning.

The next morning when Oh went to the kitchen, he was surprised that Cha had made breakfast for him. “Why did you make breakfast?” Oh asked out of curiosity.

Cha told Oh a mysterious story. Cha was sleeping when a young man looking like a high school student knocked on the door. It was most curious that the door and curtain suddenly became transparent, allowing Cha to see what was going on outside the door. She was about to open the door when the young man disappeared into thin air. Cha was very sleepy, so she didn’t think much about it before she went back to sleep again. Within a short time, the same young man knocked on the door again. Like the previous time, he knocked on the door a few times. Before Cha opened the door, he stopped knocking. By then, Cha was completely awake. She thought, “Perhaps it was a hint for me to make breakfast because Young-Kyu was going to Seoul? I’d better go make breakfast.”

Riding in the subway in Seoul, Oh saw a woman sitting across from his seat holding a book with a golden cover. Oh thought this must be a Buddhist scripture judging by its golden cover. But it did not look like any Buddhist scripture he had seen before. He bent over to check out the title of the book. It said Zhuan Falun on the cover. Oh was shocked and immediately remembered the Holy Wheel-Turning King descending to the human realm, as described in Nirvana Sutra. Except for the Holy Wheel-Turning King, who would have the temerity to claim that he is “turning the Wheel of Law?” Oh told the woman, “This is a very precious book” The woman replied, “Would you like to read it?” Oh said, “Indeed, I would like to read it. But I cannot accept such a precious book for free. If you would give me your phone number, I will mail you the money for the book.”

Oh anxiously opened Zhuan Falun. The first thing he read was Lunyu. Young-Kyu Oh said, “I was so shocked that my mind turned blank. Its content is so profound that I felt as though I had seen the whole universe.”

As soon as he finished reading “Lunyu,” he telephoned Cha and told her, “Stop reading Nirvana Sutra from now on. I will present you with an incomparably precious book. From now on, study only this book.”

As soon as Oh returned to the temple, he showed Zhuan Falun to Cha. When Cha opened Zhuan Falun and saw Mr. Li Hongzhi’s photo, she was overcome with surprise. “This is the young man who woke me up in the morning.”

Since then, Beop-Ryun Cha has been cultivating in Falun Gong and conducting herself strictly according to Zhuan Falun. Cha said that she sees Teacher when she practices the sitting meditation and Teacher looks just as young as when she saw him the first time. Teacher looks as young as a high school student with one hand in his pocket.

Oh added, “Every time I read Teacher’s Hong Yin, I cannot stop crying. The only thing that occupies my mind is to have more people know about Falun Gong. This is the only thing I think about.”

After Oh watched the Divine Performing Arts performance, Oh said that he is all the more convinced in his choice of his lifetime pursuit..