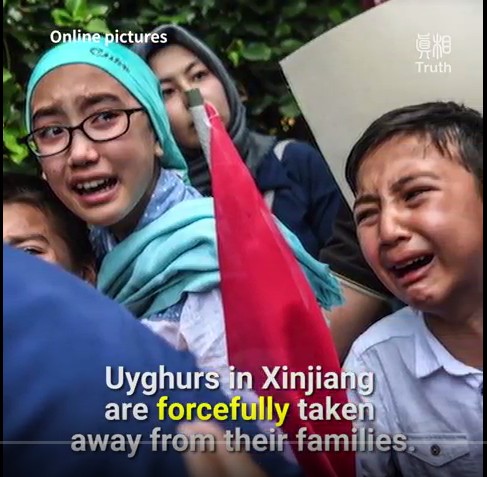 This video is about the Uyghur tragedy in China.In China, Uighurs of Muslim faith are persecuted similarly to Christians and Falun Gong practitioners.According to an article by The Guardian, Uighurs from the Xinjian Province are snatched from their families and deported to re-education camps.

Nobody knows if they are alive or dead.

According to the Wall Street Journal, satellite photos show that in the Xinjian the communist regime continues to build large concentration camps.

Six Uighurs, who have experienced the camps, told the Wall Street Journal that prisoners suffer physical and mental torture.

Their arms and legs are tied to the chairs for more than 9 hours, they are not given enough food and are forced to eat pork; besides they can not pray or fast during Ramadan.

According to five family members of prisoners interviewed by the Wall Street Journal, many inmates died while in detention and others died shortly after being released.

Kairat Samarkand, a Kazakh Muslim who was detained in the re-education camps, said the prisoners had to thank President Xi Jinping before they could eat.

They had to say: “Without President Xi, there would be no China”.

The US Congressman, Brad Sherman, said that the number of Uyghurs deported to re-education camps is about a million, more than that of Jews during Nazi-fascism.

The purpose of the CCP is to exterminate the religious faith of the Uyghurs.

After many witnesses spoke of the abuses that occur in the camps where the Uyghurs are detained, the prisoners were transported to other parts of China, where they underwent surgical operations to pick up their organs, as is the case with Falun Gong practitioners.