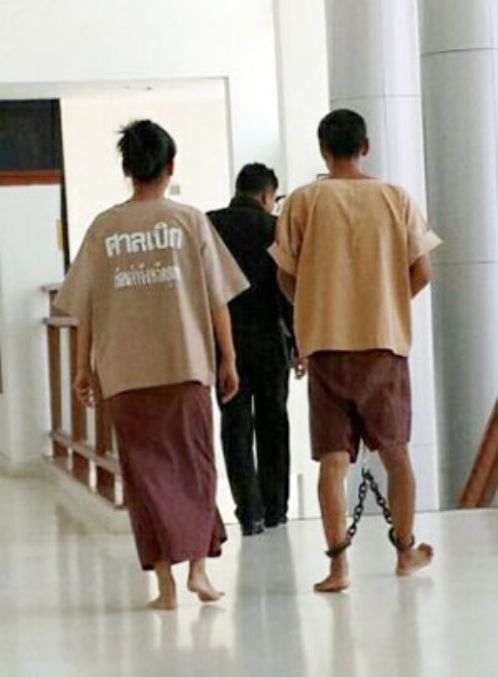 On April 22nd, 2016, two refugees from China, Song Zhiyu and Gu Qiao, attended the last hearing of their case in Chumphon provincial court. Both of them were arrested after having mishap in the sea and were charged with illegal stay in Thailand. The judge decided starting their deportation process immediately. Then their lawyer requested the judge to postpone the deportation for a month and the judge granted the request. Song Zhiyu and Gu Qiao, who have UNHCR protection letter, called on UNHCR to rescue them.

On the same day, Li Xiaolong, Gu Qiao’s husband, Chinese Democratic Party Leader of Southeast Division, was present at the hearing. Li Xiaolong said the court made the decision based on Thai new immigration law, under which whether they plead guilty will not be considered. Now that the defense counsel requested for one-month extension for deportation which was also agreed, Song Zhiyu and Gu Qiao were taken back into prison. Within a month, the defense counsel will communicate with UNHCR and urge them to fulfill its obligation which is to protect Song Zhiyu and Gu Qiao from being deported to China.

Li Xiaolong said, according to the last court’s situation, Song Zhiyu and Gu Qiao were not asked to sign on the verdict. And as long as the judge had made the decision, they would be deported to China. Now the judge agreed to extend one month. So we need to seize this opportunity to communicate with UNHCR to help rescue them. If they cannot be rescued in a month, they will be sent back to China.

He also said that he wrote three letters to Thai Supreme Court and asked for bailing Song Zhiyu and Gu Qiao out, but he was refused. His wife, Gu Qiao, got depressed after receiving the decision. She couldn’t accept it. Even worse, in prison, Gu Qiao was bullied, and her emotion is very instable now. Li Xiaolong added, they had asked UNCHR to help, but the UNHCR officer thought Song Zhiyu and Gu Qiao had broken Thai law, and said they could only deal with it after the lawsuit was over. Zhang Hong, Song Zhiyu’s wife, also sat in court. She said she did not know the details of the trial, for the lawyer was a Thai people and it was difficult to communicate with him. She also said her husband was surprised about the decision, which he thought was not supposed to be so.

Zhang Hong added, since her husband was detained, UNHCR never contacted him. After today’s court, she will ask UNHCR about it. She hopes Song Zhiyu and Gu Qiao can be released in a month. She said: “I have never heard my husband talk about UNHCR contacting him. If the UNHCR is willing to do something to rescue them, such as cooperating with the court, the situation would be better. Otherwise, my husband and Gu Qiao will be deported to China.” she added, last week, when she went to the prison to visit her husband, Song Zhiyu told her that once he was sent into a cell with many prisoners, where he has no place to sleep for a couple days. He almost mentally collapsed. Later on, he was transferred to another cell, and the situation was a little better.

On Friday, Jennifer Bose , a UNHCR officer in Thailand, replied the situation through email. In the letter she said that due to need to protect privacy and safety, they could not comment on this case. Also, Thailand did not sign《1951 Convention Relating to the Status of Refugees》and the 《1967 Protocol Relating to the Status of Refugees》, so UNCHR could not cite the International Convention and protect the refugee and people who asked for asylum. It is possible for Thai government to consider them as undocumented immigration.

The reporter called the Chumphon provincial court, but no one answered. In the court on March 28th, Song Zhiyu and Gu Qiao did not plead guilty.

Our station reported earlier that on February 29th, nine Chinese refugees in exile in Thailand tried to escape Thailand for Australia by boat. But they met big wave in the sea the next day and was forced to ask help from Thai government. Later, some of them, including Song Zhiyu, Li Xiaolong, Gu Qiao and her son were detained in Chumphon, other people including Li Xiaolong’s elder son, his brothers and Zhang Wei were released and went back to Bangkok.