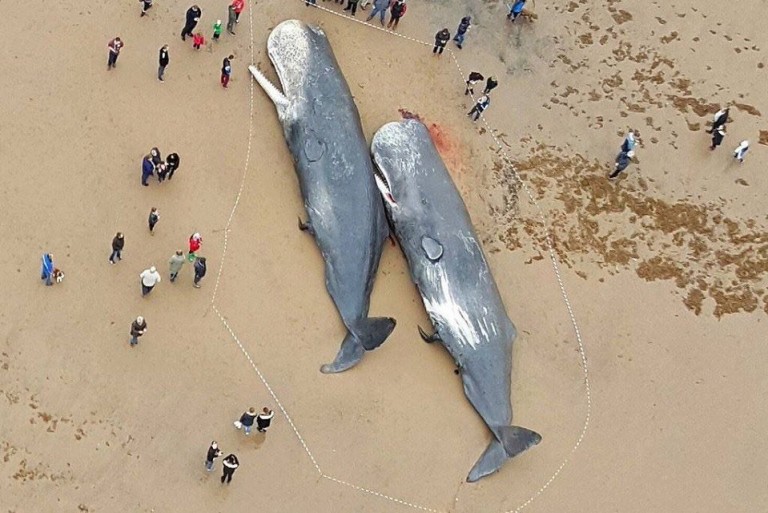 The whales’ deaths are symbolic of humanity’s shocking disregard for marine life.

In January, 29 sperm whales were found stranded on shores around the North Sea, an area that is too shallow for the marine wildlife. Only recently were details of the animals’ necropsy released. However, scientists were deeply disturbed by what they found in the animals’ stomachs.

According to a press release from Wadden Sea National Park in Schleswig-Holstein, many of the whales had stomachs FULL of plastic debris, including a 13-meter-long fishing net, a 70 cm piece of plastic from a car and other pieces of plastic litter.

Some suggest that the animals thought the items were food, such as squid, which is their main staple. Others, however, believe that the travesty is largely a result of humanity’s shocking disregard for marine life, which has resulted in an overabundance of plastic in the oceans.

Said Robert Habeck, environment minister for the state of Schleswig-Holstein:

“These findings show us the results of our plastic-oriented society. Animals inadvertently consume plastic and plastic waste, which causes them to suffer, and at worst, causes them to starve with full stomachs.”

Nicola Hodgkins of Whale and Dolphin Conservation echoed that statement. She stated:

“Although the large pieces will cause obvious problems and block the gut, we shouldn’t dismiss the smaller bits that could cause a more chronic problem for all species of cetacean – not just those who suction feed.”

This isn’t the first time a sperm whale has been found dead with innards full of inedible contents. In 2011, a young whale was found floating dead off the Greek island of Mykonos. Its stomach was so distended, biologists thought the animal swallowed a giant squid. However, when its four stomachs were dissected, nearly 100 plastic bags and other pieces of debris were found.

It should be noted that the plastic is not what killed the young male sperm whales. According to National Geographic, they died of heart failure. This was a result of mistakenly swimming into the North Sea, likely in search of squid, and then not being able to support their own body weights in the shallow water. As a result, their internal organs collapsed.

Regardless, the fact that many of their stomachs were full of pollution is a horrible indictment of humans. As has been reported in the past, 80 of the plastic which is discarded on land ends up in the oceans, where it is consumed by wildlife or swirls for years in great garbage patches. The fact that mankind – a species with a smaller brain than a whale – is responsible for such a travesty is ironic and saddening.

Until humans learn the value of living sustainably while respecting all life forms, travesties such as this one will continue to take place.

This article (Sperm Whales Found Dead In Germany, Stomachs FULL Of Plastic And Car Parts) is free and open source. You have permission to republish this article under a Creative Commons license with attribution to the author and TrueActivist.com