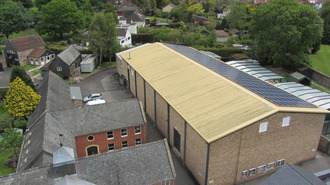 To: Amber Rudd; Parliamentary Under Secretary of State for Climate Change

We want more solar pv on commercial buildings. It is criminal to leave suitable urban roofs uncovered and so it ought also to be illegal.

Why is this important?

It is common sense and often repeated public opinion that green fields should not be used for solar farms while acres of perfectly suitable roof are available. We must make better use of our national resources and that includes conservation of our countryside while generating power invisibly and silently where it is needed. Often it is more expensive to mount in fields and normally the electricity has to be transmitted further from the countryside.

There will be cases for village scale solar paddocks developed by and for the community, as rural settlements do not have large commercial buildings; but it is much harder to justify large scale rural development to service the demands of a city when that city has not used its commercial roofs first.

Financial incentives alone are not effective. Feed in Tariff, electricity sales and savings mount up to a good return, but manifestly fail to induce development on the vast majority of warehouses, supermarkets, offices and factories. Very many commercial premises have large daytime electrical use so solar power will directly reduce grid demand and prove to be especially effective.

Legislation is now required in addition to the incentives.

There will be buildings that are not suited; mostly those that are too old or too small, and so to simplify matters the legislation may only apply to younger buildings and those above a certain size. Buildings that might otherwise be considered unsuitable will not be developed as they would not attract external investment.

External investment would always be an option when the building owner did not want to carry out development themselves. Any tenant would have first option to take a lease, community owned social enterprises would have the second option and where there is no uptake within a prescribed period, then profit driven commercial developers would be offered the roof to develop. If the roof is not suitable, development would not be viable, so the owner, tenant or other developer would not pursue the option and the roof would not be developed. It also follows that the best roofs would be developed first and that in every case the owner would have the chance to keep control of the process and the proceeds.

There are risks inherent in development, structural aspects, fire safety and waterproofing will have to be carefully considered by any developer, whether that developer is the building owner or someone else, just as they are today. If the risks are considered too great then that building would not be developed. Lease terms are already tested widely with parties and lenders, but it may be necessary to define a level of fair rent.

The legislation can be simple and work as disability discrimination legislation works. There would be no government authorities patrolling the streets, but instead developers in the social and private sector would approach the local supermarket, for example, and ask them what is proposed to accord with this new legislation. Only on very rare occasions might it be necessary to use the force of the legislation to impose a penalty.

1) greatly increase the quantity of clean, green power production where it is needed most in urban and commercial centers;

4) reduce the pressure on greenbelt development;

5) optimize the use of space; and

There has always been compulsory purchase where space is required for infrastructure. No building owner is exempt from legislative control of their property. This may be viewed as an extra imposition by some, but it is a logical development of long established principles to achieve tangible benefit. The effect will not disadvantage building owners as they would have the opportunity to profit from development, and would otherwise be protected by fair lease terms.

And She Is Off! Teen Activist Sets Sail For UN Climate Summit In New York And Chile

The Man Who Rescued More Than 1,600 Children From Sex Trafficking: This Is The True Story Of Real-Life Superhero Tim Ballard