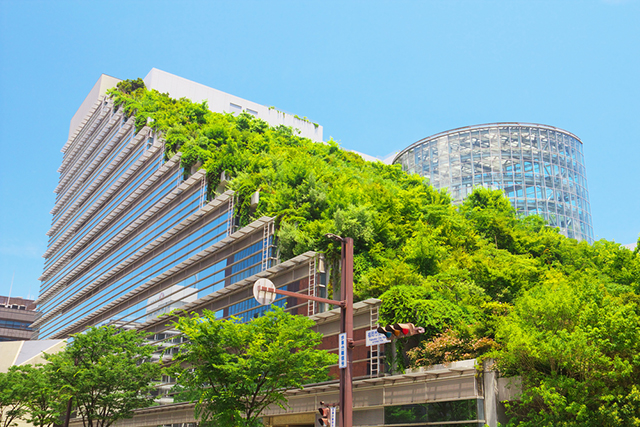 Green rooftops will soon be sprouting up across France, thanks to a new law passed in March.

New buildings in the country’s commercial zones – think shops, offices, and restaurants – must now have either solar panels or green roofs, meaning a growing medium such as soil and a covering of vegetation.

The new rooftop vegetation will provide habitat for birds, absorb airborne pollutants, reduce sewer overflow by retaining rainwater, and reduce the urban heat island effect whereby high concentrations of concrete buildings and asphalt increase air temperature. Green roofs could even improve worker productivity, with a recent study by the University of Melbourne finding that participants who took a 40-second break to look at a green roof were more focused and accurate when they got back to work compared to those who viewed a concrete roof.

John Farrell, the director of democratic energy at the Institute for Local Self-Reliance, says that France is taking the right approach because laws like these – that put all new building projects on an equal footing – can be very effective at boosting city-wide, or even country-wide, sustainability levels. He says the most cost-effective way to install a green roof is during a building’s construction, rather than adding it on later.

Similar green-roof bylaws exist in various cities around the world, including Tokyo, Toronto, Copenhagen, and Zurich. In Toronto, the first city in North America to enact such a law, all commercial and large residential buildings built since 2009 have been required to have at least 20 percent green-roof coverage. In Copenhagen and Zurich all new flat roofs, both private and public, must be vegetated. And since 2001, all new buildings in Tokyo larger than about 11,000 square feet are required to have at least 20 percent usable green-roof space.

However, France is the first to introduce such legislation country-wide. The new law means that France’s urban and industrial skylines might look more like New York City’s booming rooftop farms and less like a concrete jungle.

French environmental groups initially pushed for a law that would require all new rooftops to be entirely covered by vegetation. But due to concerns about cost and objections from real estate developers, activists compromised with the French parliament and agreed to a softened version of the initial proposal.

The French government also added a stipulation of their own, allowing solar panels to count as green roofs. This addition may help France catch up with its European neighbors in terms of installed solar capacity. Currently, all of France’s solar panels can add a maximum of 5 gigawatts of power to the national grid at any one time, compared to 20 GW in Italy and almost 40 GW in Germany.

In the United States, lawmakers have taken a different approach: Cities like Washington, D.C., Chicago, Philadelphia, and New York City have offered financial incentives for installing green roofs. Installations have almost doubled since 2008 and now more than 17.5 million square feet of roofs across the country are considered “green.”

Even without national legislation, that’s a far greater volume of green roofs than the 178,000 square feet currently reported in France. And, with the exception of a 12 percent drop in 2013-14, installations have increased year-on-year since at least 2004 according to Michigan State University (MSU).

Some people, like Bradley Rowe of the MSU Green Roof Research Program, argue that a green-roof law is unnecessary in the United States. “Offering incentives such as tax breaks is better than making someone do something,” Rowe said. “Building owners forced to put on a green roof may cut corners.”

But whether laws or financial incentives work best for increasing green roofs, there is plenty of progress to be made. For now, many people will be watching France to see if the ecological, economic, and social benefits of green roofs can be translated from a city scale to a national one.

In the meantime, check out some of the amazing green roofs that already exist around the world.